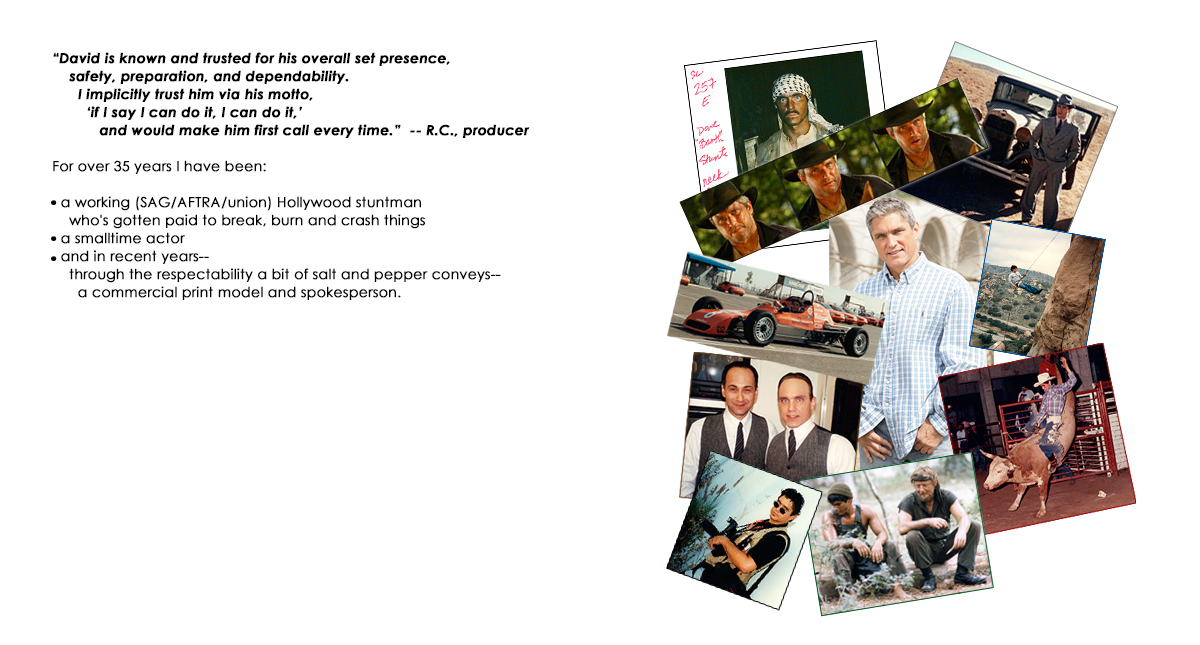 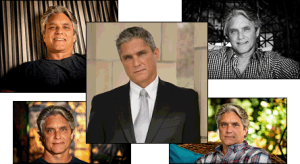 I truly love the collaborative aspect of film and television work. Always an ensemble, always a hive of activity, with all (ideally) working toward the goal of the final product. When the bullseye is hit, it’s a rush. And even when the target is missed, there are still lots of things to learn and ways taught in which we grow. Click on the following links to go directly to your area of interest, or scroll down.

I have been fortunate to work– in the capacity of straight actor, stunt actor and/or print model, with many people on films such as: Hook, Robocop II, Last Man Standing, True Lies, Godzilla, Always, Blind Fury, Dazed and Confused, The Heart of Dixie, Lost Angels, Keaton’s Cop, Cohen and Tate, Night Games, The Chase, Address Unknown, The Only Good Indian, and more. 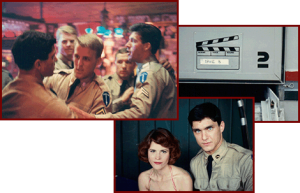 The Heart of Dixie was a first time that I got traveled and had a dressing room with my name on it. A stunt/acting part I was a soldier, Virgil, trying to cut in on a dance with Virginia Madsen. The guy won’t give it up, a fight ensues. Treat Williams was really generous in giving me a couple tips. Virginia Madsen and Ally Sheedy were nice to me as well.

Stunts for me has been some of the most fun I have had on a set, and is really more of a zen exercise for me, than I assume it is for most. There is the concept of the natural high, by way of also putting my money where my mouth is. As is said– if they pay the dough, you gotta go. If I say I can do it, I can do it. I envision what is required, set the equipment… and then, say it’s a high fall… you can lean out so far without going over, and pull yourself back… but at some point you have to put yourself over that threshold– confident in your abilities. On Action, on cue, on target, hurting or embarrassing no one, especially myself. 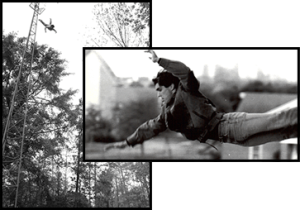 A few highlights have included:

An indy movie out of Houston where our local stunt team did a long chase scene throughout downtown, with any of us in any of the vehicles in any given shot– culminating in a “pipe ramp” (car hitting what looks to be another car, by way of an unseen heavy steel rail, which cause the car to fly up and spin in the air) with the intended conclusion of smashing a hot dog cart I was pushing, with me ducking out at the last second. A crowd-pleaser at a couple film festivals.

A 75-foot high fall into boxes– unknown to me– was 5 feet short of the record at the time. Wish I had known. Still– this and a few others gave me something to show L.A. stunt coordinators as proof that I wasn’t full of it. 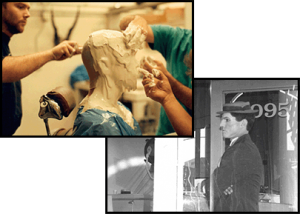 A great project and one of my near misses, as far as riding the gravy train and chasing fame and fortune goes. I auditioned and was cast as Buster Keaton for what was to be a series of Lincoln-Mercury spots (my chance to be something akin to a Flo from Progressive, or, er the Geico lizard, in a recurring stream of spots). I viewed every Buster Keaton movie I could and practiced his pratfalls. I got sent to Greg Cannom’s f/x shop and sat for the lifecast (by JC Logan and others) which generated the prosthetics (applied by Oscar-winner Ve Neill). Had a world-class Hungarian mime coach me some, as well as Eleanor Keaton, widow of Buster, who was amazing and a treat to meet. It went great. And then they never greenlighted the rest of the series. Speaking of near misses– I did a photo shoot once for Sprint, where I was to be on buses and billboards… and they never went forward with that campaign. Always thought it would be a thrill to see myself on a bus or billboard.

To my knowledge I was the only stuntperson to be cast as both a pirate and a lost boy. The smallest of the pirates and about the tallest of the lost boys. Those sets were great. There were secret appearances by Glenn Close and David Crosby, among others, as pirates, etc. It just felt like how you would imagine Old Hollywood to have been. I got put through weeks of stage combat and fencing classes, the scenes of which primarily got chopped out of the movie. Just 6 weeks of fun. 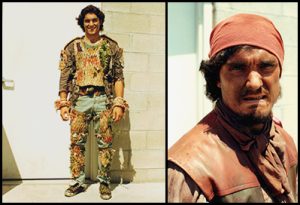 In Kansas City I got to stunt coordinate and do a good deal of the driving for a chase scene ending in a notable ramp jump. And for a beloved, departed producer, Rick Cowan, who was a champion of mine, and whose laugh I can hear in my head surprisingly often.

Stunt people get their work by way of hustling— visiting sets, catching the eye of the coordinator when not busy, just getting seen and hoping they find a place for you. No one gets cast via casting agents, at least without passing muster with the coordinator, because no one is going to want their name on having brought in a knucklehead or a daredevil who isn’t set-savvy or could get someone hurt. On such a hustling mission to the set of True Lies, director James Cameron spotted me (with me having worked– lighting and underwater safety -wise on The Abyss), and long story short, convinced the coordinator with, “We should find something for him.” I was sized for a terrorist wardrobe, actually got called back later that night, and started the gig getting my neck broken by Arnold Schwarzenegger (onscreen, not in reality). Thanks again Jim!

For the Bruce Willis film Last Man Standing, coordinated by Allan Graf, I was flown to El Paso, and in order to double the head of the Italian gang (Ned Eisenberg, who had more of a receding hairline than me) they shaved about an inch off the front of my head, covered that with make-up, greased the rest back and there I was. That haircut paid some extra bucks, as I was to look like a psycho for a while after, until things grew back. And one of the bigger thrills of my career: being in the make-up chair each morning of that week, with Bruce Dern on my right and Christopher Walken on my left (and me doing my best to maintain, and not say or do anything stupid to get me kicked out of there) 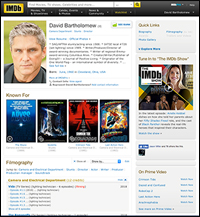