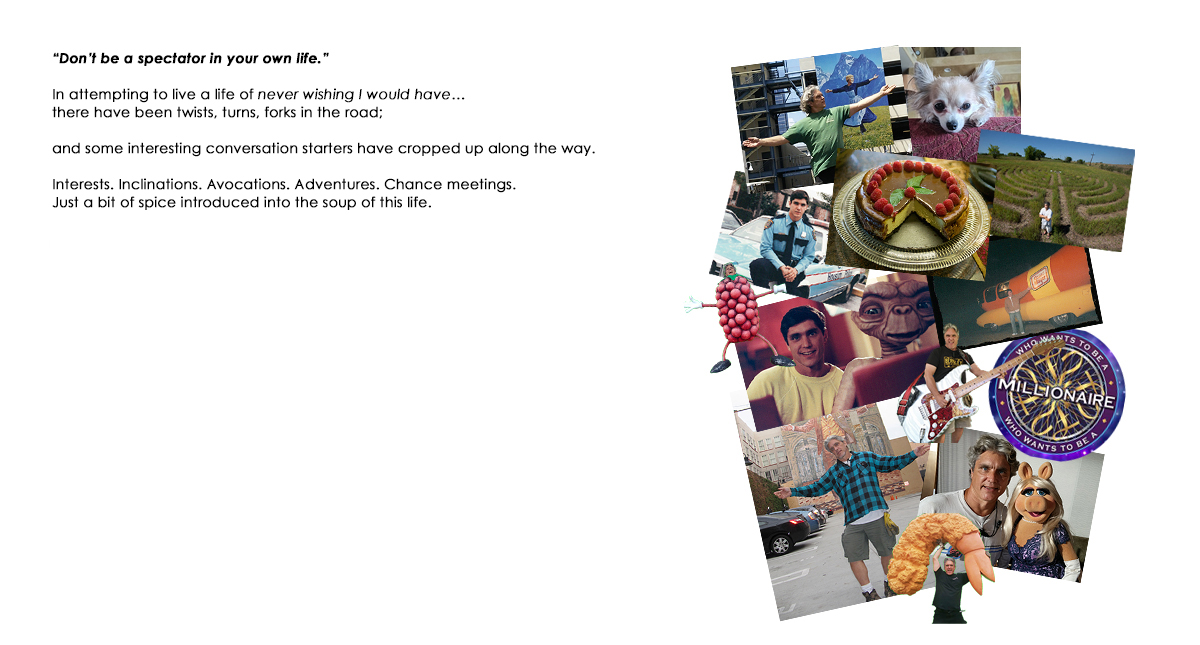 A nickname I once gave myself was “A Creator of Moments”. The idea of trying to make connections with people, shake them out of daily routines, see folks as more than their jobs and as having interesting stories to tell if you just ask the right questions.

And then– re-directing that kind of thinking toward myself– just doing my best to appreciate and sample and partake. To generate some fun memories in order to have something to take with me when I go, in acknowledgment of all of the “you can’t take it with you” stuff.

I share some of these– not to show how bitchin’ I am; rather– to draw up and out of any willing participant memories of these great moments in your own life. I also like to continue to refresh the lesson I took from the Bruce Springsteen song “Glory Days”— that of not getting hooked on successes of the past. If I find myself tired of regurgitating this or that tale, then it is clearly time to generate some new memories, to shake off the dust and cobwebs, quit resting on my laurels and break out of the ruts I in which I might find myself. Just an ongoing challenge to keep it interesting.

I have won two limbo contests in my life. Once, I entered an arm wrestling contest at Calico Mining Town outside of Barstow, figuring it would be the quickest twenty bucks I ever lost, but darnit I was going to give it a try. I have delivered a baby, not of my own making. And then there are the following items that could be said to speak for who I was, am, am not, might be on the way to becoming. Just a smorgasboard of my own brand of weirdness.

If it ended here, as only husband of Joan and father of pets, it could be looked back on as a good life. Service to something higher, and having these Littles to come home to makes everything worth it, and inspires me on to greater things. When you find your person… stop looking.

Forks in the Road 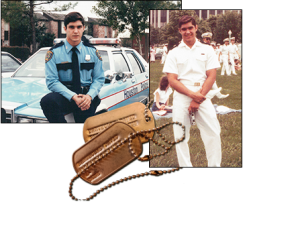 A number of times I found myself at a fork in the road, where a decision had to be made. To attempt to continue along two diverse paths wasn’t going to serve either of them justly. And so, when the potential to continue on to becoming U.S. Naval officer, by way of the academy, bumped up against ideas stirred at a Harry Chapin concert and a visit to a friend’s radio station in D.C., that “world of the straights” succumbed to a creative urge that would not be thwarted.

Later, as work at a tv station got slow and the writing was on the wall; as I happened to meet and work alongside a Houston police officer at a Dar Robinson stunt show at the Astrodome, I figured, why not give it a try. Three years as an H.P.D. officer– in patrol, accident, and dive team– gave me glimpses (as had the tv world prior) of things I never would have seen, and taught me things about the human condition (for better and worse). but finally it came down to– me not wanting to have to look at people like they were crap (which was a way one could operate), and so back out of the straight world, and back into the idealistic gypsy/carny world of film/television/enertainment… where I have resided ever since.

All of the forks and choices make sense in the long view, and I don’t regret any of it; as well as maintaining friends from each of these areas to this day.

You Can’t Win if you Do Not Play 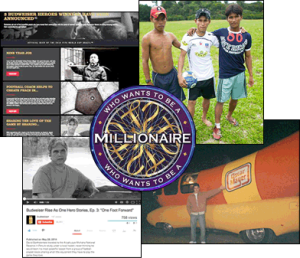 I have always liked puzzles. And I like contests. And I have won a couple. Notably a What Would You Do If You Had the Use of the Oscar-Mayer Weinermobile For a Day? contest, and a Budweiser “Rise as One”, win a trip to the World Cup in Brazil contest, by way of telling an inspirational story with a backdrop of soccer. I feel these count as writing income, basically, as both required a piece to be written to spark the imagination. And I was also a contestant on Who Wants to be a Millionaire (Regis Philbin version), where you had to win the fast finger portion to get to the chair, and I got two out of three correct, and missed the chair by two-tenths of a second on the one.

After many years as a union Set Lighting Technician/Best Boy and rare (unenjoyable, unmasterful) appearances as a Gaffer, it occurred to me one day– “Duh! I have this spiritual side and life/quest as a mystic… and isn’t it (non) coincidental that some of my “make the donuts” work is in Illumination?! 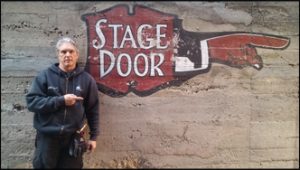 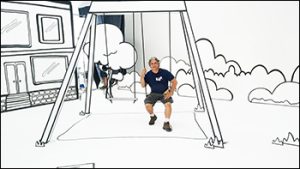 So many years of my life have been spent on film sets and studio lots, and they are really one major arena where I feel totally comfortable, at ease, and with a sense of mastery. Film folk are awesome– idealists who started here with, or brought from elsewhere their, dreams. What it takes to work side-by-side, under pressure, under increasing bean-counting, for the insanely long hours that we do… and not blow your stack regularly… are some really remarkable folks who can buoy each other’s spirits through it all.

I always say that as retirement comes, what I will miss are– the people, and the breakfast burritos!

Forget “Pay no attention to the man behind the curtain”… sit down with some amazing film craftspersons and get ready for some stories.

As a crew person, or even as a fellow actor alongside other actors, you learn to respect the process, and not bug a star with fanboy questions or what-have-you, if they are in the zone. Or most other times either. But there are opportunities here or there to check in and shoot the bull once in a blue moon. Whether I have made a connection here or there or not, and whether they are normal or batsh*t crazy full of themselves, I always kiddingly let Joan know who my close personal friend(s) of the day is/are. Since neither of us is losing our sh#t over people or making idiots of ourselves, this just continues to be a running gag she has grown used to.

Something in me is tied to the land. And here or there I have spent a smidge of time generating land art on a small scale– medicine wheel here, large crystal there. But there was indeed a big push from the universe which took seven years to bring to fruition– that of erecting/constructing/landscaping a labyrinth on our land. First the land was leveled and stakes and twine strung in a certain place on our property. What-with the cost of that many feet of edging, or that many pallets of rock the cost was prohibitive and I had to keep restringing every time a deer or other animal would walk through during the night.

Then one day, after all of this time (knowing I had to honor this Muse) it hit me– if I made the walk paths as wide as our push mower I could generate a larger version on the other side of the yard. LunaBella Labyrinth became a reality approximately two hours later… after the seven year gestation period. It is a Chartres-inspired 11-circuit configuration– 3/8 of a mile in, 3/8 of a mile out, 3/4 mile total. And a place where one can Walk. Breathe. Pray. Receive.

It is listed on the Worldwide Labyrinth Locator and is part of the Artline Project, of natural Earth Art along the 39th parallel. It is open sunrise to sundown, is free to walk and has been embraced by people from numerous countries who have come to walk it. 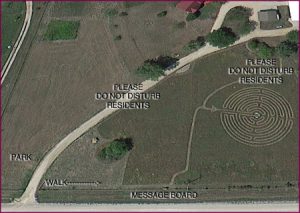 Also in the land art category, and known to a number of local pilots in the area, is the “Joan” mowed from my riding mower, in cursive writing, across the pond from the house. I think she still gets a thrill looking out at it.

The Time I Was Bronzed 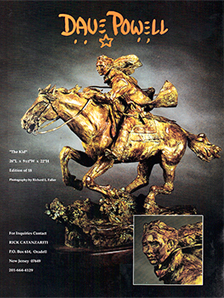 An amazing friend and western artist of limitless talent, Dave Powell, told me he wanted to use my face for a project he was into. I was invited to dinner, we talked prior to dinner as he seemed to fiddle with something in his hands. We ate. And I asked when we needed to do the modeling for the clay piece which would serve as the reference for the sculpture. “I did it while we were talking.” And he produced an egg-sized version of my head. The project was named “The Kid” and here it is in Southwest Art magazine. 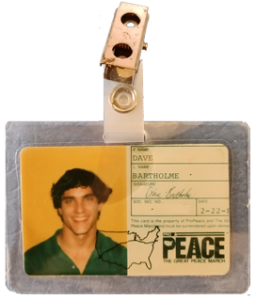 Going for a Walk

A typical David thing that didn’t surprise anyone was the time I heard about a Peace Walk Across America and decided to do it. The Great Peace Walk was an idea where folks came to L.A., trained some, did a practice mini walk to work out the kinks and was then slated to go the distance, as they say. Peace is a good thing, and kind of a no-brainer, but I was thinking that I could be a stringer for my friend’s Washington Independent News service and just collect the kind of people stories I like. The thing actually did get its first sample foray off the ground– from Griffith Park to an armory close to Lake Balboa, a whole 13-ish miles. And even then there were serious cracks in the foundation. I grabbed my stuff and bailed, ahead of the throng, but did believe I heard that a rag-tag bunch went on to complete it. Though it didn’t generate the press or support desired. But hey– how ‘bout points for trying?

Wet Behind the Ears 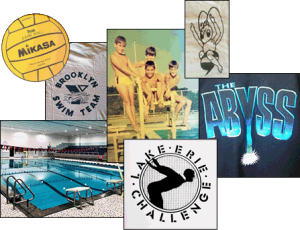 Almost as much of my life has been spent in or under the water as on land. From early swim lessons; swim and water polo teams from age 8; lifeguarding and teaching swim lessons; scuba certification at 15; jumping in to support my sister, Diane, in an attempted swim across Lake Erie; collegiate swimming and water polo at Navy; more water polo at Ohio State; a sabbatical at age 34, playing polo for LA’s Valley College; and stints of underwater lighting and safety-ing of actors on The Abyss and Crimson Tide, etc.; water has been my solace and the place where I get my head right. 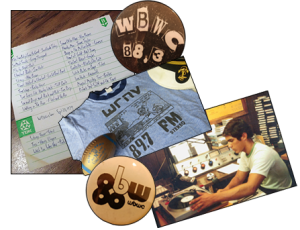 Music has been a staple throughout my years. Band through jr. high, marching band in 10th grade, a summer of drum and bugle corps, and stints as a radio disc jockey at WRNV (U.S. Naval Academy, Annapolis), WBWC (Baldwin-Wallace College, Berea, OH) and WOSR (Ohio State, Columbus, O-H-I-O). My patter stunk but my tune selection, I feel, was primo. 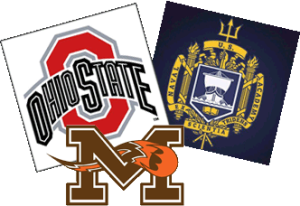 I was a Midpark Meteor (Middleburg Heights, suburb of Cleveland, OH), a midshipman at the U.S. Naval Academy, and an Ohio State Buckeye… along with some random classes elsewhere. And a workshop and seminar junkie, attempting to continue to be a true student of life.

What Else is Cooking? 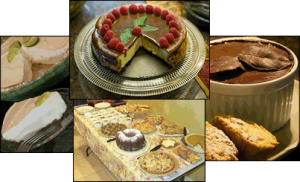 My wife is a renowned master natural perfumer and aromatherapist, highly intuitive, Italian, and just can feel into blending recipes along the lines of those other talents. Me? I love to cook (mostly desserts) and move more slowly and come to experiment swapping things in and out more as I go along. But if you want a decent apple pie, crème brulee, key lime pie, chocolate mousse, chocolate truffle or various other treats, I can pretty much guarantee you won’t be slyly spitting any of it in your napkin when no one is looking.

These are some of the things that float my boat and have made me who I am. Now– your turn. 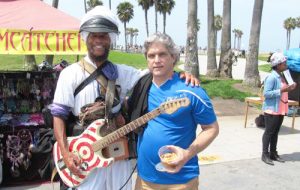